Lions and Tigers and Bears, Oh My! 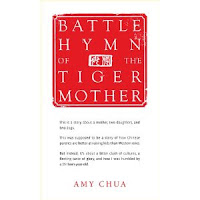 The other morning, my neighbor and I were sitting in Starbucks, trying to figure out how we could get our kids to take an improv class together. Her daughter and my older son are both 14 1/2. Years ago, we had family dinners, and they would laugh, run around the backyards and go under the sprinkler together. Now they have nothing to do with each other, even though they're friends on Facebook and live two houses away. They both love to perform, and the class was being taught by a woman who had appeared with Jason Sudeikis and Amy Poehler, but my son decided he didn't want to take the class.

My neighbor and I really want them to take the class together, not because we have any fantasy that they will resume their friendship, but because we want to carpool. "You have to be a Tiger Mother about this," my neighbor said. "You have to make him do it." Coincidentally, the woman who runs the class was sitting right near us, pounding away on her laptop. "Fourteen and a half is a tough age," Miss Emily said. "I'm not sure you can be a Tiger Mother here."

Although none of us had read the book, we all know what we were talking about. Amy Chua's Battle Hymn of the Tiger Mother, that controversial, best-selling memoir about raising your children through tough love, tears and piano practice, is generating a lot of talk.

Pretty women sell books, especially when they're well-educated, have Ivy League pedigrees and teach at fantastic schools. I wish Amy Chua the best, but I don't tend to read child-rearing books and I'm probably not going to read much of this one.

When my older son was first born, I read a lot of books about how to be an effective mother. The only one I remember loving and not being able to put down was The Mother's Circle. It was a great book and I read it with one hand, while I nursed my baby with the other. That said, I have no idea what it said or told me to do. These days, if I want child-rearing advice, I turn to friends, whose children are older than mine; my mother or my mother-in-law; my sister-in-law, who is a clinical psychologist and the mother of three boys; or a woman I know who is an excellent listener, and has two boys of her own, one of whom is at Yale (!).

If I'm really desperate, it's late at night, and my husband is asleep, I'll mine my memories of my grandparents.They managed to have a huge and positive influence on their grandkids. Despite the challenges their daughters and son-in-laws rained down upon us--divorce, remarriage, more divorce, various new boyfriends and girlfriends, mental illness, a slew of new step and half siblings, and the early deaths of my father and my uncle--all the grandkids turned out okay, in large part because of our grandparents.

My grandparents were both school teachers, but by the time I was born, my grandmother had retired and my grandfather had left teaching and gone to work as a stockbroker. They didn't do anything particularly special with us but they always paid attention. Whatever we did, they thought it was wonderful. When we visited, they made chicken and rice, listened to what we had to say, gave us money when we needed it, helped with math homework, and wrote letters to us at summer camp. My grandfather used to draw funny pictures and tapes pieces of gum to the letters. Sometimes, he would include stamps. My grandmother would write about playing bridge and the bad haircuts my grandfather gave himself. "It looks like he put a pot on his head and cut around it," she wrote. If they went to see a show or the opera, they would name the production. They adored each other and loved us, and when I reread those letters, I feel it all.

My kids are older now and what I've discovered is that child-rearing is like religion, marriage, education and sex: There is no one universal approach to doing it. My kids watch too many video games, spend too much time on Facebook, don't practice the piano enough and like rough-and-tumble sports like football, wrestling and hockey. They go on sleepovers, stay up too late and come home sick and exhausted. They fight. They clear the table after dinner but they never make their beds. They take the garbage out on Sundays but only after I've harassed them. They rarely walk the dog but they do feed her and crawl into her crate to kiss her good night. They are not perfect and never will be. So far, I don't see any evidence of secret drug use or wine being siphoned off. I'm sure they'll do one or both of these activities, and I just hope they'll have the good sense to do it in our house, or their friends' houses, and not at school or in a moving vehicle. 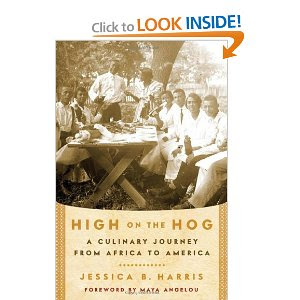 All this is a long way of saying I'm not ordering Tiger Mother. The book that tempts me this week is Jessica Harris's High on the Hog: A Culinary Journey from Africa to America. I just finished Anthony Bourdain's Kitchen Confidential, which was laugh-out loud funny and extremely well-written---he's an outstanding storyteller.

It was recommended to me by my friend Kate, who is a mother, reader and foodie. I love food writing, since it is so often about love and stress and trying to make life better by cooking good food. It's not a bad approach to raising kids. The New York Times gave High on the Hog a great review yesterday (http://www.nytimes.com/2011/01/25/books/25book.html). I will read High on the Hog while my younger son puts post-it notes in The Sign of the Beaver. We'll both be happy.

Obviously, this blog is called Flawed Mom so I won't start offering great, sticky gobs of parenting advice now. I'll just throw out this one: Sing their praises and stick around.
Posted by Writermom at 4:46 AM