Tiger, Tiger: Burning Bright, or Out? 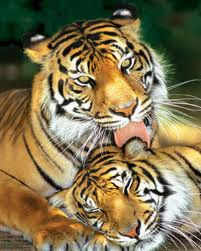 Last weekend, I did something I said I wouldn't do: I read Amy Chua's Battle Hymn of the Tiger Mother. I couldn't help it; people were discussing it in emails and debating the merits of it at my younger son's basketball game. Though I'm not a fan of child-rearing books, this one so quickly became part of the national conversation that I had to download it and read it on my husband's Kindle.

I couldn't put it down.

Say what you want about Amy Chua---she's an extreme parent, an abusive taskmaster, a narcissistic nightmare and just a plain mean, old Mom. She's definitely tough: She doesn't allow any of those fun, time killing activities like play dates, sleepovers, school plays, or marathon Facebook sessions. But she's a terse, excellent writer and the book reads like a thriller: It's fast-paced and chapters end in cliffhangers. Will Chua's daughters Sophia and Lulu stick with the instruments their mother has imposed upon them? Will Popo, Chua's mother-in-law, survive chemotherapy? Will Coco the dog learn to behave? Is Pushkin, the second dog, smart enough to keep up? Will Chua's sister, Katrin, survive her bone marrow transplant? Will Chua's husband, law professor and novelist, Jed Rubenfeld, leave her? (Actually, that last question doesn't come up in the book, but you do start to wonder how much wear and tear the Chua-Rubenfeld marriage can take.)

Amy Chua's approach to raising kids is not for everyone. She doesn't have any compunction about describing herself as "compulsively cruel." She has the energy and self-discipline to sit for hours (not just one or two a day, but entire evenings and weekends) and listen while her daughters play piano and violin. Their practice sessions are grueling, even when Chua isn't there: Before she travels, she leaves the girls copious notes about how to practice their songs, measure for measure. Her attention to detail borders on freakish but she gets the job done and she isn't ashamed: When one of Chua's law student finds the practice-makes-perfect notes she leaves for her daughters, he shows it to her in horror; Chua recites the student's comments and then reproduces the notes he mocked. "DRILLS PAGE 7 Opening measures: mm. 18 & 19: a. Use 1/2 the bow pressure & faster bow on chords. Lower elbow. Keep violin still! b. Drill little notes (da da dum) to make them clear---drop fingers more quickly..."

Both girls become extremely accomplished musicians---winning competitions, studying with master teachers, playing on the third floor of Carnegie Hall. One of the daughters emerges happy, confident and proud of her accomplishments. The other daughter---not so much.

You have to give Chua credit for owning up to the fact that her Tiger Mother approach backfired with her younger daughter, Lulu. It is not ruining anything to say that eventually, Lulu does exactly the opposite of what Chua wants. She doesn't become a drug addict or a prostitute, but she throws over violin for tennis, is quickly successful (she makes the varsity team in middle school) and seems to take real pleasure from it.

What Chua leaves out of this book are topics that might not be important to her but do come up when you're raising teenagers:. There is no discussion of sex, dating, drugs or how to get along with peers, and you wonder what kind of friendships, if any, Chua's daughters have. (Chua does mention that her own parents never even discussed puberty with her, a word she describes as "gross.") Chua is a bit of a narcissist and it's hard to know if she has any compassion or empathy for anyone but herself.

She doesn't ask, but you do wonder: Is jamming your interests down your children's throats really a good idea, when it triggers so many fights, tears and rebellions? Are her kids happy? Her older daughter, Sophia, is beautiful and still playing the piano. She beams out of pictures and recently wrote a letter to the New York Post, singing her mother's praises. You do worry a bit about Lulu (now 14), who looks less than thrilled in pictures. You hope she's taking notes for her memoir. You wonder about Jed, who sounds occasionally complicit in his wife's nudging the girls to stardom, but also ambivalent about Chua's single-mindnessness. To Chua's credit, she notes Jed's occasional challenge of her child-rearing methods. Chua always makes her daughters carry their luggage and instruments when they travelled. "Interestingly, Jed had the opposite instinct," she writes. "It bothered him to see the girls loaded down, and he always worried about their backs."

It's hard to know where Chua found the time to do all of this. She sounds super-human. She's a full professor at Yale Law. She spends a lot of time meeting with students; it sounds as if they love and respect her. She's published three books, travels, and lectures. She's thinking of getting a third dog (!). While she was on book tour, she sometimes flew to three cities in one day and took the Red Eye back.

This book seriously makes you question your own parenting skills, specifically, should you let your children pursue their passions? Chua would say Yes, but only if you decide what those passions are ahead of time. My older son wrestles. He used to play ice hockey, a sport I disliked. Practices were early morning and late in the evening, games were (way) out of town. My son loved it, but I found it violent and thought his coaches were corrupt knuckleheads. When one of them suggested I start pulling him out of school early so that he could take private lessons at 2 p.m., I didn't consult my son, I just said no. Three concussions later, he gave up hockey and took up wrestling. I don't particularly like wrestling---the kids look like they're engaged in hand-to-hand combat and are trying to kill each other. But my son likes it, the fiercely draining practices are at the end of the school day, the matches are blessedly short and his coaches are decent, intelligent men, so I keep my mouth shut.

By the same token, I let my younger son give up clarinet and School of Rock so he could play football. When he rams into someone, my stomach lurches; when he talks about plays, my eyes glaze over. But he loves it and it's satisfying to watch your child pursue something he has discovered on his own.

I know some people who grew up with extremely strict parents. They went to great colleges but also went through dark periods of alcoholism, anorexia, rampant promiscuity and other addictions. My parents were pretty strict. My father helped me write and rewrite my papers, and taught me how to study, but he also complained when I gained weight. My mother made me practice the piano, read and encouraged me to exercise, so I wouldn't get fat. Some of this worked, some of it backfired. I started sneaking cigarettes when I was 12, and eating batches of brownies alone, late at night. It wasn't until I got to college and was smoking almost a pack of cigarettes a day and eating eight donuts for breakfast (I kid you not) that I stopped being so self-destructive---I didn't like being overweight and out of breath. A little freedom to make small mistakes and goof around goes a long way towards not screwing up big time later.

The indisputably great take-away from Battle Hymn of the Tiger Motheris the loving way Chua writes about classical music. Her daughters play Mozart, Mendelssohn, Chopin, Liszt, Beethoven and Bach. It is a pleasure to read how they master these composers' works, even if one of the girls does take bites out of the piano in the process.

After finishing the book, I took Kanye, Jay Z, and Cee Lo out of my car and replaced them with Beethoven's 9 Symphonies and Mozart's Musical Masterpieces. I've been driving around the snow listening to "Eroica," "Pastoral," "The Marriage of Figaro" and "A Little Night Music." Listening to this music has been energizing, inspiring, calming and delightful.

Yesterday, I drove my older son home from a wrestling match. (He won.) When he got in the car, he asked, 'What kind of music do you have in here?"
"Classical," I said, cheerfully. "We're going to be listening to Beethoven and Mozart all the time now."
"I'd rather listen to an airhorn," he said and turned the music off.

Which got me wondering: How would the Tiger Mother do raising boys?
Posted by Writermom at 4:18 PM