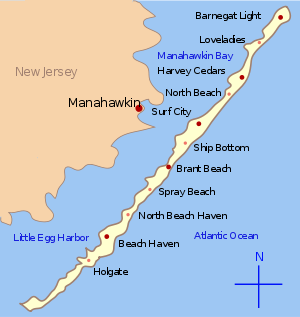 My husband and I spent this past weekend in LBI, aka Long Beach Island, aka the Jersey shore. I wasn't always a Jersey Shore girl. One summer at the end of the Eighties, I summered in East Hampton. I was broke and had recently had my heart broken by a guy who did something very well in finance. He had made a fortune at a young age and had given me a thick gold bangle bracelet and taken me to St. Bart's six weeks after we had met. It was all very tra la la. Alas, I wasn't what or who he was looking for, so he dumped me while we were on a bike trip in France, and I went back to living alone and supporting myself as a journalist. I made next to nothing and what I did make, I spent on rent, dry cleaning, haircuts, step classes and David's cookies. But I remembered the good life I had lived with him so when a friend from high school found us a share in a house in East Hampton with a big group of twentysomethings, I said okay, even though I didn't quite have the $1,200 required to purchase the share.

Neither my friend nor I had a car but my old boyfriend had bought me a bike and my friend still had hers from college, so we biked around East Hampton. We would take step class with Phys Ed in town, go to the Barefoot Contessa for croissants and iced coffee, bike along Lily Pond Lane, then make our way to Georgica Beach. My friend was also nursing a bruised heart at the time, and we were both secretly hoping our old boyfriends would show up at the beach and see us. They never did. Or if they did, they saw us and ran.

A couple of years later, I met my husband, my friend met her husband and eventually, we all moved back to our hometown. (That's how it works in New Jersey.) My husband had had a share in Fire Island, but once we moved to New Jersey, we came to our senses and decided that commuting to New York to go to the beach was insane. When our older son was two, we started going to Long Beach Island, a long, skinny, barrier island along the Jersey Shore.

This is not the Jersey Shore that spawned Snookie. LBI is flat. It's 18 miles long and at the end northern end, there's almost nothing to do. That's where we go. Even though it's only 25 miles from Atlantic City, on the northern end, there's no gambling and not a single movie theater. The further north you go on the island, the harder it is to find a bar. You end up telling yourself that ice cream, miniature golf, big waves, a walk on the beach after low tide, a strong wind for sailing, and a light wind for paddle boarding are all you really need to have a good time. (And if you don't believe yourself the first time you tell yourself that, tell yourself again.)

LBI reminds me of the Midwood section of Brooklyn, where my grandparents lived for 70 years. The buildings are low and there are tons of kids riding around on bikes without helmets. There's a store that still calls itself the 5&10, the sidewalks are crowded, middle aged men go for runs without their shirts on, gorgeous young girls ride past in bikinis and good-looking teenage boys in muscle shirts run after them. It's hot. The delis offer such goodies as "nooners" (burgers) and there are lots of people of various generations, sitting around in bathing suits on their porches, eating lunch and talking about what they're going to grill for dinner. Parents jam their chairs, umbrellas, pails and boogie boards into grocery carts and walk their kids across the boulevard to the beach. There's no shortage of sweaty, tattooed bodies on the beaches in LBI. Most of the bodies look pretty good and the ones who don't, don't seem to care.

The island has its charms. At one point in Harvey Cedars, the island is only 1/5 of a mile wide and you can see the bay and the ocean simultaneously. There are several excellent restaurants, Yellow Fin, Black Eyed Susan's and Cafe Aletta, among them. None take American Express and Black Eyed Susan's only takes cash. LBI is nothing fancy and somehow, despite my earlier love affair with the lush life in the Hamptons, I've come to love it.

My husband and I spent the weekend eating, sailing, running and paddle-boarding. Paddle-boarding on a summer day is a beautiful thing. You stand on a surf board, suck in your stomach, lower your sunglasses and paddle around. After an hour, your foot is asleep and your arms are sore. You move so slowly that people in motor boats offer to tow you in. Don't let that dissuade you; paddle-boarding is delightful. There's something meditative and almost Biblical about the experience. You're standing still, but you feel like you're walking on water.

On our way home, we stopped at a restaurant in Manahawken called Mud City Crab House. You just know that a restaurant with that name is going to mess you up. We walked in and sat down. Sometimes, you look at a menu and you can't decide what to eat. I knew immediately. Crab claws with mustard sauce and fried pickles with Thousand Island dressing on the side. I love fried pickles. There’s nothing worse for your breath or your digestive system and six hours later, you're still feeling them but they are the most delicious fried food I've ever had.

The waitress brought over six fried pickles, a vat of Thousand Island dressing and a small plate of crab claws. I felt sorry for the claws. They had nothing on the pickles.
My husband had ordered a jerk chicken sandwich. He was looking at me with some combination of interest and disgust.
"Do you want a pickle?" I asked him.
"No," my husband said, "I don’t like pickles."
"They're good," I said out loud, but inside, I thought, More for me. Oh, that initial taste of salty, crunchy pickle, dipped in buttermilk and flour and fried in oil! Some wonderful chemical shoots up into your brain and makes you feel alive like nothing else. The pickles were so good I forgot where I was.
Eventually, my husband picked up a fried pickle to taste. I only had two left. Was he going to keep eating the one he picked up? No, he was not. He put the remaining half a pickle down. I grabbed it.

Why is fried food so friggin' good?

Once we got home, my husband went to the gym and I went for a run. While I was running, I was acutely aware that I had eaten about 3,000 calories worth of fried pickles. When I got back, I saw that our peaches, nectarines and plumbs had ripened nicely over the weekend. I started slicing them up and making a platter for us to nibble on while we figured out what we wanted to eat for dinner. But who was I kidding? My husband went upstairs to shower, and I went to my secret stash in the freezer, the place where I keep chocolate covered espresso bean (lovingly known as "Mommy's little helpers") and two chocolate hockey pucks left over from my older son's bar mitzvah. It would be a shanda to eat those pucks and I didn't really feel like going on a caffeine binge at dinner time. I poured myself a glass of wine, and started rummaging around, looking for something I might have forgotten about. There it was, a bag of white-chocolate covered Oreos from Godiva. I had bought them back in June, when I was trying to educate my older son about the pleasures of Oreos dipped in chocolate. There were three left. I ate them all in the time it took me to write this paragraph. Maybe less.

Back to the pickles. A quick Wikipedia search reveals that fried pickles were first invented in 1963 by an Arkansas man named Bernell "Fatman" Austin. Enough said.

Cover a plate with parchment paper or wax paper. In a shallow dish, combine buttermilk, salt, and pepper. Place pickles in mixture and set aside.
Pour the flour, cornmeal, seafood seasoning, and 1/4 teaspoon Cajun seasoning into a large, resealable plastic bag; shake to mix well. Add pickles a few at a time and tumble gently to coat evenly with the flour mixture. Remove and place on prepared plate.
Heat oil to 365 degrees F (180 degrees C) in deep-fryer or heavy deep skillet.
Fry pickles in several batches until golden brown and slightly crisp on the outside with a moist interior, 1 to 2 minutes. Drain on paper towels.
In a small bowl, combine buttermilk ranch dressing with 1/2 teaspoon Cajun seasoning; blend. Serve as a dipping sauce for warm pickles.
Footnotes

Editor's Note:
The nutritional analysis for this recipe reflects an estimated 10% of the oil for frying as well as the full amount of the coating and breading. Therefore, the values represented may not be accurate.
Nutritional Information

*This recipe is from Allrecipes.com.
Posted by Writermom at 4:19 PM