Skip Plan C and Go Right to The Big C 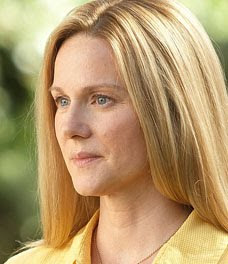 Ah, summer time. The kids are away, swimming, hiking, studying screenwriting, eating new stuff and making their own beds (here's hoping, anyway.) I'm not teaching this summer so I have had the luxury of doing whatever the hell I wanted these past few weeks. I promised myself I would do a little work and not get swamped by domestic chores: I would write a short story (started it.) I would write an article (in the middle of it.) I would self-publish a book of recipes and essays called My Inner Fruitcake on Amazon (haven't even begun.) What I have done, besides sitting on the patio, paying bills, seeing doctors, submitting medical claims, muddling through Cutting For Stone and hiring a crew of painters to paint the basement, is watch a lot of TV, specifically, "The Big C."

Every summer, I get a mammogram, sonogram and pelvic sonogram. A lot of women I know schedule these appointments while the kids are away so that we can, as my sister-in-law says, make sure our lady parts are in working order, without having to worry about other people's feelings if the results aren't what we hoped for or expected. I had a couple of scary moments and in the end, everything was fine but while I was waiting for results and going back and forth to the city for tests and biopsies, I started watching "The Big C" on Showtime.

If you haven't watched this show, you are lucky, because now you can start! For the past ten days, my husband has come home from work, and there I've been, sipping a glass of sauvignon blanc, blissed out and laughing as Laura Linney, Oliver Platt, Idris Elba, Gabourey Sidibe, John Benjamin Hickey and Gabriel Basso make you believe that you are watching an extended family of smart, screwed-up people deal with the fact that Laura Linney's character, Cathy, has cancer and lives in Minnesota.

I know that sounds depressing, but this show is so funny, sharp, sad, sexy and thought-provoking, you won't be able to stop watching or thinking about it. At the end of every episode, I was laughing or crying. My friend Liz, a writer/artist/designer who runs the firm Elizabeth Conn Design,, told me about "The Big C." I have to admit, I was initially dubious. The premise sounded upsetting and besides, I've spent the past few years watching "Weeds" and couldn't bring myself to watch another show about a middle-aged mother on Showtime. "Nancy Botwin," Mary-Louise Parker's character on "Weeds," was the worst mother on TV but she was so much fun to watch. At the end of last season, "Nancy" chose Plan C, turned herself into the police for a murder her younger son had committed and went to prison. This season, she's living in a halfway house, her handsome, drug-dealing husband, "Esteban" is supposedly dead, her kids seem just fine, and I didn't care about the characters anymore. I needed a new viewing distraction so I started watching Laura Linney and Oliver Platt in "The Big C."

The show is addictive. Linney plays Cathy, a beautiful, blonde, 42-year old wife, mother and high school teacher who has stage four melanoma. (Linney is 47 in real life but easily passes for younger.) She initially doesn't tell anyone she loves about her diagnosis because she doesn't think they can handle it. Only her good-looking, thirtysomething oncologist knows what's going on. She keeps her illnesss from her handsome, homeless, bipolar brother, Sean (the awesome John Benjamin Hickey, who just won a Tony for his role in "The Normal Heart'), her husband Paul (Oliver Platt, overweight, self-conscious and unattractive but so funny, loving and sweet, you can see why Cathy adores him), her teenage son Adam (Gabriel Basso, really good and believable as a cute, confused 14 year old boy) and her favorite student, Andrea (Gabourey Sidibe, who was so beaten down, sad and vulnerable in "Precious" and is so wise, sassy and articulate here.) Eventually, Cathy tells her 79-year old neighbor, Marlene (Phyllis Somerville, beautiful and moving, even though she plays a racist, anti-Semitic, homophobic woman with Alzheimer's) and slowly starts to tell her family and students what is going on. Along the way, she has an affair with Idris Alba 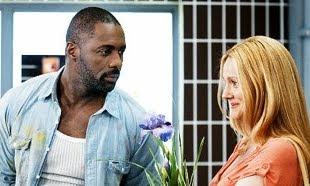 , who plays a charming, gorgeous artist with an English accent and great taste in women's scarves. Alba struts around in beautiful, linen shirts---that is, when he has his clothes on.

The first season of "The Big C" consisted of 13 episodes. The second season, which started a few weeks ago, has three so far. Alan Alda and Liam Neeson show up as men who try to cure Cathy, and Cynthia Nixon, looking skinny and vampy, appears as "Rebecca," a morally compromised, flirtatious pharmaceutical rep who is Cathy's best friend from college. Nixon's character is the polar opposite of her role as "Miranda" on "Sex and the City" and she is wonderful.

During the last ten days, I've watched every single episode of "The Big C." Yes, that's eight hours in front of the telly, hours when I could have been reading, writing and spending time with my loved ones. What can I say? Sometimes watching TV beats all else. The twelfth episode of season one was shocking. The thirteenth and final episode of season one made me bawl. One of the most memorable lines from the show is, "Getting old is a privilege."

If you haven't watched this show, you can watch the first episode free on line. Enjoy.
Posted by Writermom at 4:20 AM