Give me the strange mother...

I had 41 papers to edit and grade today. Some of my students' grades were wiped out by the demons that run the college's on-line grading system, which meant I had to reread and regrade papers from earlier in the semester. What fun!

The paper crunch was due to that notorious let's-stay-up-late-and-skip-brushing our teeth-so-we-can-get-to-know-each-other-better-bonding experience known as the Saturday night sleepover. My ten-year-old spent the night at a friend's house Saturday and they stayed up all night. My normally sweet pre-adolescent came home a sleep-deprived wreck, woke up the next morning with a sinus infection, swollen glands and tonsillitis, and stayed home for two days. My younger son is chatty, even when he's sick, so any work I would have normally done over the course of three days, I had to jam into one.

Once both boys were off to school, I went for a run, gulped down a cup of hyper-caffeinated hot chocolate, and checked my watch: I had five hours to get everything done. It would be like running a marathon, except I would be sitting down, eating chocolate kisses and obsessively checking my email in between papers. Forty-one papers, by students ranging from impressive to the uh oh!, is a lot to digest in a single sitting. Once my kids came home, the day would slow down. My kids would talk about their day, and I would boil water for pasta and make meatloaf. I am grateful for the gentle, repetitive sounds that mothering makes, and the opportunity to teach college students how to become impoverished journalists, but sometimes I want to forget all about all of them, and disappear into a hair salon or art museum. I had to seriously stifle that urge today but needed more than the usual infusions of sugar and caffeine to do it.

I started rifling through the drawers of my desk, looking for inspiration and old candy. I found business cards from two guys who used to fix my laptop, my father's stapler, a lovely picture of my grandparents smiley bravely in front of a dreadful flower arrangement, a fake gold bracelet with a big turquoise stone wired to it, and the business card of a woman who had three kids, never stopped working and now has a humongous job at the Wall Street Journal. Then I found what I was looking for: Newspaper clippings about women who write.

This first quote is from Emily Nussbaum's New York Times review of Deborah Garrison's second book of poetry, "The Second Child." The review came out in December 2007. I loved Garrison's first book of poems, "A Working Girl Can't Win," which included great lines like these from "A Widow's Sex Life:"
"My sister was still young enough to cry,
to slam her bedroom door
and rage for the ironical ghost of our father."

And this winner from "An Idle Thought:"
I'm the type
who likes to cook---no,
really likes it; does the bills;
buys towels and ties;
closes her eyes during kisses:
a true first wife.

But Nussbaum's sharp review of Garrison's second book persuaded me not to buy it. Nussbaum basically argues that Sylva Plath did the mothering poet thing far better, and chastises Garrison for trying to sound so sweet:

"To my mind, the great unsung poet of motherhood is Sylvia Plath. She may have a reputation as the ultimate misery chick, but in fact, her writing overflows with talk of birth, of breast-feeding and motherhood, much of it, despite sad undercurrents, loving and celebratory. In the gorgeous “Nick and the Candlestick,” for instance, Plath writes,
O love, how did you get here?
O embryo
Remembering, even in sleep,
Your crossed position.
The blood blooms clean
In you, ruby....
"It’s unfair, of course, to expect Garrison to be like Plath. She has her own gifts and an audience sure to appreciate them. In real life, I’d rather have a likable next-door neighbor than a bipolar goddess as a confidante. But in writing? Give me the strange mother over the sweet one any day."

This next quote is about Patricia Highsmith, the novelist and crime writer. Highsmith wasn't a mother, didn't have kids and pretty much hated her own mother. She was a lesbian who preferred married women and was known to be anti-Semitic. But she wrote beautifully about the demons that fueled her writing. This is from another New York Times story, in which the reporter walks around the village with Joan Schenkar, whose biography of Highsmith, "The Talented Miss Highsmith," came out in December 2009.

"Highsmith was all too aware of the demons that fueled her writing. At 26, on New Year’s Eve 1947, she wrote a 2:30 a.m. entry in her journal: “My New Year’s Eve Toast: to all the devils, lusts, passions, greeds, envies, loves, hates, strange desires, enemies ghostly and real, the army of memories, with which I do battle — may they never give me peace."

The final quote I found was from another New York Times story about Kay Ryan, who became Poet Laureate in July 2008 . The writer, Patricia Cohen (who also wrote the Highsmith story) described how ill at ease Ryan had once been, talking and writing about herself. "For a woman who once shrank from exposing herself, this new position will put her in the public eye more than ever. But at this point, Ms. Ryan is philosophical. "I realized that whatever we do or don't do, we're utterly exposed." It was a relief to re-read that. 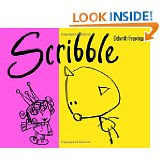 In the middle of the afternoon, the doorbell rang. I waited to answer it, hoping whoever it was would go away. When I finally opened the door, there was a package on the doorstep. Inside was my cousin Deborah Freedman's children's book "Scribble." I haven't seen my cousin Debbie in fifteen years, maybe more. Last time I saw her, her daughters were small and pretty. Now, one is in college and one is applying. I'm sure they are still pretty but I doubt they are small. Debbie and I found each other through our blogs and reconnected, God help us, on Facebook.After spending time on her blog, http://deborahfreedman.wordpress.com/, I ordered, "Scribble." Debbie's new book, "Blue Chicken," is being published by Viking and coming out in September. "Scribble" is funny and beautiful. The plot involves "scribbling rivalry" between two girls. Debbie was an architect before she was a writer, and there are glorious pictures of windows in her work. The book ends with the words, "And they all lived Happily Ever After. As drawings sometimes do." I put the book on my desk for inspiration, glad there was another writer in the family---even if she's probably not particularly strange.

Thinking about these women, and the discipline it took for them to sit and write and get their work out into the world, made me want to sit and write. I stopped marking papers, and started writing this post. I hadn't written anything for a few days except a few nagging and congratulatory emails, and it felt good to be writing again. Writing is its own delicious and distracting addiction and I got to the point where I stopped thinking about my students and just kept pounding away at the keyboard. But it was the end of the semester, and I had to get their final papers back to them so I ended up working well into the night, and into the next morning. I was pretty much marking papers right up to the minute I had to teach---and because there was no gas in my car, I had to race to the gas station at the very last minute and ended up being late to class.

I'd like to say I would have done things differently, should have done things differently. Of course, I should have. But I was so happy to be lost in that trance of writing, reading, and remembering, that I don't think I could have. Writing, like other pleasantly addictive activities, takes us to that magical, untethered place of bliss and forgetfulness. But unlike other addictions, it plops us right back into reality with barely a black-and-blue mark. That might sound strange, but it's true.

Preheat oven to 375 degrees.
Melt butter in saute pan, add onion, carrots, celery, peppers and garlic. Cook, stirring often, about 10 minutes. Cover and let chill for an hour or so.
Combine salt, pepper, cumin, nutmeg and eggs in a bowl and beat well. Add ketchup and cream/milk. Mix. Add the meat, turkey bacon/sausage and bread crumbs. Add the cool vegetables and mix thoroughly with your hands for five minutes or so.
Put mixture into two metal loaf pans. Cook for 45 minutes, until crispy on top. You can also lay turkey bacon on top of each loaf. Let cool a few minutes before serving.
Posted by Writermom at 7:06 AM