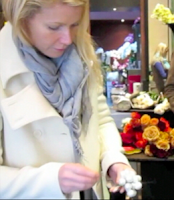 Here is what Gwyneth Paltrow and I have in common:
1) We both have two kids, and our youngest kids are named after figures from the Old Testament.
2) We're both married to our first husbands.
3) We both like to cook.
4) We both have younger brothers.
5) We're both close to our mothers.
6) We both have Jewish fathers who died.
7) We both have websites that dwell on food and occasionally shopping and spirituality.

If you know anything about Gwyneth Paltrow (long, leggy body; long, beautiful blonde hair; huge acting talent; gorgeous Academy Award winner; wife of Cold Play front man Chris Martin; guest star on "Glee;" star of the new movie "Country Strong," a part she got fat for, fat being a relative word), you know that our similarities end with our websites (and with the fact that my oldest child isn't named after something you can pick up on the produce aisle.) Gwyneth's wesite is called Goop . As much as I hate to say this, it's really rather charming and helpful. She provides recipes and cooking tips and this week, she sent out a post on how to make a wreath from scratch, with the help of your local florist.

I found Goop through one of my son's teachers, who is an avid cook. This teacher told me about the website, The Wednesday Chef , which is one of the most luscious food-and-cooking websites I've ever visited. The woman who writes the essays is Luisa Weiss, a young, excellent writer who is almost as spectacular looking as Gwyneth. Weiss is writing a cookbook called My Berlin Kitchen and she writes dreamily about all kinds of delicious-sounding food. Her descriptions of meals she has made are almost as stirring as MFK Fisher’s and Nigella Lawson’s. Just reading Weiss's posts on what she ate while she was writing that post makes you want to run out and make yourself exactly what she was eating while she was writing, even if what she was eating is out of season (in this case, an avocado sandwich.)

In her post on making Christmas cookies in Germany, which is apparently a national sport, Weiss mentioned a recipe for seeded whole wheat loaf, and mentioned that she found it on Goop. (It took me a long time to figure out that Gwyneth signs her posts "gp," which bookends goop.)

Without getting all meta our here in cyber space, one website led to another, and there I was, reading what Gwyneth had to say and then, before I knew it, I was subscribing to her blog and thrilled when one of her emails popped into my email box. Oh look, a note from Gwyneth! All of her posts are homey and casual, and occasionally funny and off-color. In the one she sent last week on "Cozy Shoes," she wrote, "I don't know how it is where all of you are, but I am freezing my ass off!" She then went on to write about various warm boots you could buy. In a post from earlier in December, she quotes a spiritual leader and Episcopal priest, both women, who wrote interesting essays on creating and maintaining boundaries. The posts were short and to the point and made you feel slightly better for reading them.

If I sound like a bit of a star chaser, well, I am. I'm always looking for women to emulate. Most of the women I admire have or have had some serious personal problems and don't manage, or never wanted to manage, work, marriage and child-rearing. They are either divorced and childless (Edith Wharton), married with children but suicidal (Anne Sexton, Sylvia Plath), married but childless and suicidal (Virginia Woolf), unmarried and childless (Eudora Welty), mothers but divorced and alcoholic (Mary Karr), or not particularly good mothers, by their own admission (Ellen Gilchrist). When I see someone like Gwyneth, who really seems to have, do and balance it all, I think, it can be done! Looking at her blond head, bent over, carefully making wreaths in her beautiful, white coat, on a chilly, December London morning, actually gives me hope that you can be an artist, a mother, a cook,a movie star and a homemaker. All you need are moss pins, a glue gun, glitter apples, scissors and an active fantasy life.
Posted by Writermom at 7:21 AM