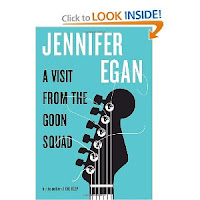 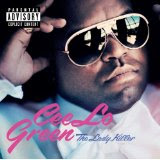 We spent last week freezing in sunny, cold, Southern Florida. I know, boo-hoo, there was a massive snow storm in the Northeast while we were away, and no mail for two days, but before you get out the world's tiniest violin, let me just say that on average, the temperature in the Northern Keys hovered in the mid 50's, it was cloudy much of the time and there's nothing worse than paying for a warm tan and freezing your butt off instead.

We wandered around in sweatshirts, sandals and a daze, and distracted ourselves by drinking cappuccino with cane sugar, sipping hot chocolate, and eating conch fritters, alligator tail bites, grits and various kinds of fish. Though we played tennis and Scrabble, and did a little paddle boarding and snorkeling, the highlights of the trip were reading and eating. I got a third of the way through Anthony Bourdain's Kitchen Confidential, about a quarter of way through A.S. Byatt's Possession, was floored by Emma Donaghue's Room and devoured A Visit From the Goon Squad, by Jennifer Egan.

I took a fiction writing workshop with Egan during the winter of 2000, when we were both in the early stages of our pregnancies with our sons (she was pregnant with her first boy, I was pregnant with my second.) She was an outstanding teacher and though I can't remember specifically what she said, and can't remotely remember what I was writing about, she was extremely kind and intelligent.The gist of her advice was revise, revise, revise.

A Visit From the Goon Squad picks you up and drops you down into the lives of a wide range of characters, all of whom are or become connected to the music business in some way. The book covers suicide, a drowning, suppressed homosexuality, infidelity, kleptomania, autism, dashed dreams, failed friendship, the ups and downs of the music business, suburban malaise and drug abuse, and yet you finish it feeling full of hope. 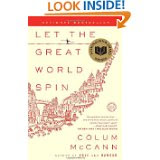 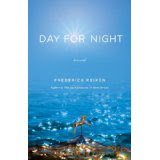 It was one of the most exhilarating books I've ever read. It was similar in scope to Colum McCann's Let the Grade World Spin, Frederick Reiken's Day for Night, and Elizabeth Strout's Olive Kitteridge, in that characters wander in and out of stories and each other's lives, and you end up with long, riveting glimpses into fascinating and unfamiliar worlds.

The book made me so happy that I immediately tracked Egan down on Facebook and posted a message on her book's page. A few hours later she emailed back and thanked me for reading her work. I'm still doing a little happy dance.

In addition to reading in Florida, we also did a lot of eating. One morning, we went fishing with Captain Juan out on the Gulf. Captain Juan spent four years in the Navy and knew his way around a boat, but it was cold and viciously windy as we headed out to sea and our expectations were low. Then the fish started biting right away. Because of the cold weather, the fish were hungry, and the minute we lowered our lines into the water, they started snapping at the bait (raw shrimp.) We caught so many that Captain Juan started calling his friends and telling them to swing by. "Come on over, I've got snapper for everyone," he said. We caught mangrove and lane snapper, grouper, mackerel and ladyfish. My kids were ecstatic, my husband was grinning, and even I, who usually find fishing both boring and relaxing because I just stand in the sun and don't catch anything, caught so many fish that I had to put the rod down and rest. Captain Juan estimated that we caught over 100 fish. He kept some and packed some up for us and directed us to take it to Lazy Days restaurant in Islamorada, where he promised they would cook it up for us.

While we were waiting to be seated, I spotted a cookbook called The Flavors of the Florida Keys, by Linda Gassenheimer, a food writer for The Miami Herald. The book contained a recipe for one of the fish dishes that we ended up ordering (Fish Lazy Days, with Key Lime Butter Sauce and panko---it was awesome) as well as recipes for shrimp and grits, and key lime pie. 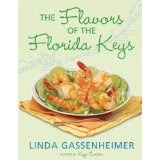 I am a sucker for regional cookbooks, particularly Southern ones, so I bought it.
My brother and sister-in-law were hosting their tenth annual Bring the Kids New Year's Eve party, so I decided to make Gassenehimer's recipe for key lime pies. I started at 7:30 yesterday morning. My neighbor wanted to go for a run but I said I was too busy baking so she came over to help. She graded the rinds off the limes, and separated 16 yolks from the whites (and she doesn't even like fruit pie.) Together, we marveled at the efficiency of condensed milk---so much fat and sugar in just two tablespoons! Since only one of my ovens was working properly, she took one of the pies home to cook in her oven, then drove her older son to wrestling practice.

The key lime pies looked yolky and yellow when they went in the oven and came out looking the same way. Overall, the effect was one of Egg Yolk Pie with Parsley Bits because the green lime rind flakes had congealed on top. When I went to pick up the pie at my neighbor’s, her son, who had just returned from wrestling and should have been hungry enough to eat his shirt, took one look at the pie and said, “Ew.”

To entice New Year’s Eve revelers to look past the pies' ugly faces, I made whipped cream and covered the pies with it. Then I took one of the remaining cans of condensed milk and the leftover graham cracker crumbs and made Magic Bars, just in case the key lime pies were a flop. The pies weren't a flop but they weren't a hit, either. When we arrived at the party, one of my nephews handed me a drink made of vodka and some kind of juice. I usually avoid vodka, because the last time I drank it, it made me cry, but I didn't want to insult my nephew so I finished the drink, helped myself to some champagne and went to stand near the pies.

C. is my sister-in-law's best friend from childhood. She and her husband made a chocolate bread pudding that was so beautiful it made my yellow lime pies look like ugly stepsisters. Looks aside, who doesn't like a sweet and tangy pie from the South? Apparently, no one at that party.

I tasted the chocolate pudding. Dang. Even in my tipsy and embittered state, I knew it was rich, luscious, and delicious, managing to combine the soft pudding texture of childhood with the sophisticated adult taste of bittersweet chocolate and vanilla bean. Adding insult to injury, my brother, who is one of the kindest men I know, felt compelled to point out that citrus flavors mostly just appeal to women. I felt like I was back in a Central Park playground---there were my children, standing alone, sweet, innocent, helpless. I had to protect the pies and help them make new friends! Emboldened by whatever my nephew had poured in my drink, I started talking the pies up and handing out slices. Partygoers took them reluctantly. At the end of the night, there was still one pie left. It is now patiently waiting for us in the freezer.

That key lime pie was yummy, even it didn't win Miss Popularity. I will be making Caroline's chocolate pudding sometime soon, but I will keep those girls--I mean those pies--away from each other.

Apropos nothing in particular except that New Year's is a good time to read, eat and listen to music, my kids and I have been listening to a lot of great songs in the car lately. Courtesy of the eight days of Chanukah, and my lack of gift-giving creativity, I bought them a bunch of CD's: Cee Lo Green's "The Lady Killer," John Legend's "Get Lifted" and Kanye West's "My Beautiful Dark Twisted Fantasy." If you've never heard Cee Lo Green, you are in for a treat. His song, "F--- You," is so funny, irreverent and catchy, it will put you in the best mood ever. (My older son reports that the words were changed to "Forget You" when it was performed on "Glee," and as "Fox News," when Green sang it on the Colbert Report.) Kanye West's "My Beautiful Dark Twisted Fantasy" is a bit of a curse-a-thon and the first time my husband listened to it, he seriously questioned my judgment as a mother. But the songs "Dark Fantasy," "All of the Lights" and "Monster" are fascinating to listen to. "Monster" features a scary, riveting, extended solo by female rapper, Nicki Minaj. John Legend's "Get Lifted" is one of the most beautiful albums ever made. Check out "Alright," "She Don't Have to Know," "Number" One" (featuring Kanye), and "I Can Change" (featuring Snoop Dogg).

Listening to these guys confessing their sins and trying to be better people makes you want to dance and sing. It's New Year's Day so let's do it. it. Happy 2011.

Preheat oven to 325 degrees, Mix graham cracker crumbs, sugar and flour together. Melt butter and add to graham crackers. Stir to make sure all ingredients are combined. Press mixture into a 9 or 10 inch pie plate. Set aside.

Beat egg yolks until they’re light, about 3 minutes. With beater running, slowly drizzle un condensed milk. Add lime juice and lime zest. Pour into prepared pie shell. Bake for 20-25 minutes. Remove from oven and cool. Keep refrigerated until read to eat. Can be frozen for up to a month.

Sift sugar. Whip cream until stiff, about 3 minutes. Slowly add in sugar and mix. Spread on top of key lime pie, or serve on the side.