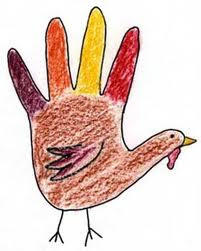 Ten years ago, my husband and I hosted Thanksgiving. Our younger son had just been born a few weeks earlier. For reasons that escape me now, my mother, stepfather, brother, sister-in-law, both my brother-in-laws, and my in-laws all had other places to be. My father, who was newly single, came over. Both he and my husband stood in the kitchen and chatted. Neither of them knew anything about cooking a turkey so they just watched our boys and talked while I took the turkey in and out of the oven and made whatever side dishes I was throwing together. I remember feeling fat, exhausted and annoyed that I was the one doing all the cooking, but also proud that I could nurse a baby and still baste a turkey. And I was grateful that my husband knew how to get along with my father.

I'm pretty sure my father came empty handed although it's also possible he came bearing three different kinds of pies. He was like that---outrageously inconsiderate, weirdly attentive, unnervingly extravagant, shockingly cheap. He could be kind and he could be cruel. We didn't always get along and if I ever write a memoir, it will be called, "In the Shadow of Lunacy." Still, he liked good food, appreciated a home-cooked meal and I liked cooking for him. He was proud that I had married, had children, could make dinner, lived nearby and didn't ask for money, but worried that I would be bored if I remained an unemployed housewife, as his mother had been. When I was applying to college, he warned me not to become some man's arm candy. And yet he loved to come over and see me in the kitchen. At the end of his life, he would appear on our driveway without warning, always around dinner time. He was getting chemo at a hospital nearby but he wouldn't tell us what his schedule was and didn't want us going with him. So he'd knock on the back door when he was done, take a seat at the table and eat whatever I was making for my kids.

For years, I watched my mother bend over backwards to make the meals that my father loved---yorkshire pudding and roast beef, filet mignon, duck a l'orange, veal scallopini, lamb chops, spare ribs, spaghetti with meat balls, lasagna, tongue, stuffed potatoes, fried chicken, matzoh ball soup, garlic bread, chocolate mousse surrounded by lady fingers, complicated souffles, apple pie. My father was a lot of things, some of them not so nice, but he was smart and successful and we ate well. From my parents, I learned that to cook is to please.

At Thanksgiving ten years ago, my father arrived, ruddy faced and happy. Whether he was happy to have somewhere to go, or just happy, I don't know. A few months earlier, when I was nearing the end of my pregnancy, my father sat my husband and I down and told us he had cancer. "I'm going to beat this thing," he said. "I'm going to be at those boys' bar mitzvahs." He didn't and he wasn't. When I think about it now, it is strange how much my father enjoyed watching me cook and how much I enjoyed feeding him. By the time my parents' marriage was over, my father had very little good to say about my mother (she always remained neutral on him. ) But when it came to cooking, it was as if he was glad I had inherited some of my mother's good qualities---competent cook, able mother, eager hostess. He never said it outright, but I'm going to take it as a compliment now.
Posted by Writermom at 3:43 PM