Chicken Soup for the Sinuses 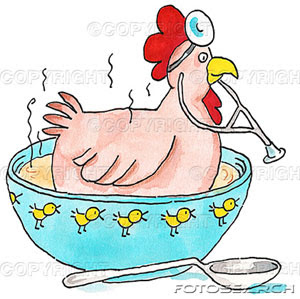 I don't know what the weather's like where you are but here in northern New Jersey, it's suddenly become very chilly. Or as my grandmother might have said, nippy.

Suburban pioneers that we are, we've been trying to survive without any heat. Earlier in the week, we turned on the heat for the first time in months. The house started to smell like smoke. We turned off the heat.

The next day, I called the heating-and-cooling guy, who installed our system eighteen years ago for the house's previous owners. The guy arrived and cheerfully informed me that what we were smelling was rust. He walked me up to the attic and showed me that the heater and the air conditioner were right near each other, and the air from one was blowing across the other. "The smell might go away," he said. "Or it might not." Just in case it might not, he gave me an estimate for how much it would cost to replace the whole system.

I decided we would live without heat. Heat rises, we sleep on the second floor, we'd snuggle up and it would be very Laura Ingalls Wilder. We would survive the long winter. My older son is a bit of a polar bear so I knew he'd be fine: He used to play ice hockey and thinks that the only outer garment required in winter is a hoodie. His younger brother is slightly more human: He sleeps in flannel pajama pants with about fifty comforters piled on top of him so he was unlikely to notice the cold. My husband has that middle-aged man thing going where he doesn't seem to notice the cold unless it's really brutal. Our dog has fur and sleeps on top of a carpeted thing in her crate. She was bred to rush into cold water in Canada and collect ducks and geese in her mouth so she was likely to be fine. I knew I'd get cold but I had no problem wearing socks and a sweater to bed.

We did this for a couple of days and then naturally, my younger son and I woke up with runny noses and sinus infections. My kids inherited their allergies-to-everything from my husband and their narrow nasal passages from me. 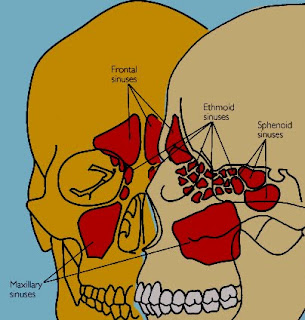 We pass a lot of sinus infections back and forth in our house, primarily because we are too lazy to do those nasal washes (which are crucial to keeping sinus infections away.) We don't attempt those homemade remedies like drink ginger tea and cinnamon coffee, eat food with cayenne pepper or fill a basin with eucalyptus oil and/or Vick's vapor rub and wait for our nasal passages to open. I know we should. Instead, we drive to the next county and see our pediatrician. Since tomorrow is my younger son's birthday, I asked the doctor if his dinner-and-a-movie party could still go forward. He said yes, as long as my son stayed home today and took antibiotics. My younger son begged to open his presents, read for a little while and then got down to the business of "resting" in front of the TV. While he was otherwise occupied, I made chicken soup.

Chicken soup is one of those glorious dishes that can be a meal if you serve it with rice or pasta, or a hearty, thank you Mommy appetizer if you serve it in a cup. I make a big pot of egg noodles and serve it with the soup. The recipe below pretty much works, no matter what ingredients you add. The secret is in the puree. 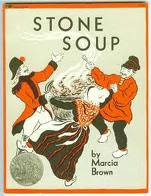 The original recipe called for a four-pound stewing hen, which we didn't have. It also called for fresh parsley, fresh dill, celery and parsnips. It was the end of the week; we had almost no fresh produce. What we did have was a few pounds of of chicken parts in the freezer, a bag of frozen peas, three cans of chicken broth and some dried parsley and dill, which were probably original to the house. There were some old potatoes sitting on top of the microwave (they were soft and budding), new onions, and several bags of baby carrots. We also had cloves and garlic. I conjured the soldiers in Stone Soup, defrosted the chicken parts and proceeded.The result is a creamy chicken soup that tastes rich and fattening but isn't. It can pretty much do everything, except fix the heater.


Pureed Chicken Soup with Carrots, Garlic and Onions
Ingredients
3-4 pounds of chicken (parts work best)
2 onions, peeled and split into four halves
Bag of baby carrots
3 cloves garlic
8 cloves
3 cans chicken broth
3 quarts of water
Dried dill (or fresh, if you have)
Dried parsley (fresh, if you have)
Salt and pepper to taste

Rinse the chicken parts and cover them with water in a large pot. Stud each onion half with two cloves (eight altogether.) Add onions and carrots to water. Add salt, pepper, dried parsley and dill. Bring pot to boil (takes about 20 minutes.) Reduce heat, put lid on pot and let simmer for one hour. After an hour, add a can of chicken broth. Let simmer another hour (simmer two hours total.) Add second can of broth.

Leave the carrots and onions in the broth. Remove chicken from pot with tongs. Meat should be falling off the bone. Dispose of bones. Put about a cup of meat back in the pot, and put the rest in the food processor (you will have several cups of pureed chicken). Puree for a minute or so. Chicken should be mushy. Add pureed chicken back to broth. Add the peas and the third can of broth, and let cook for a couple of minutes.

Make pasta or rice and add to the soup for a hearty meal, or serve on the side.
Posted by Writermom at 1:17 PM