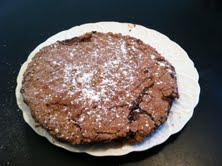 3 oz / 80 gr. dark chocolate
4-5 Tablespoons whole milk
1-2  tablespoons confectioner’s sugar
Chop the chocolate and place it in a bowl with 4 tablespoons of milk. Melt in the microwave for two minutes. Mix. When cake has cooled, spread on top. Then take powdered sugar, put in a sifter, and sift over cake.
Posted by Writermom at 2:20 PM