Sunday Night Supper: This Column is Looking for a New Home 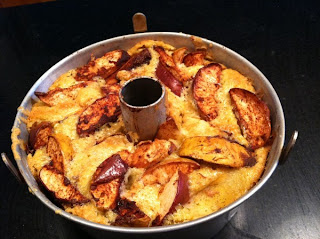 This story on making and eating old-fashioned apple cake and Magic Bars ran on Patch yesterday morning. Due to budget cuts, Patch has stopped using freelancers so this is my last Sunday Night Supper column for them. But as always, if you have recipes or comments to share, please go to the Patch site. Your comments could help land a new home for this column. Thank you, as always, and happy Valentine's Day.


BAKE for 25 to 30 minutes or until light golden brown. Cool completely in pan on wire rack. Cut into bars.
If you've enjoyed reading Laura's Sunday Night Supper column would like to read more of her work, check out her blog, Flawed Mom.
Related Topics: Food, Love, New Year’s Eve, and Super Bowl

This column is ending, but these Magic Bars and apple cake will see you through the winter.
Posted by Writermom at 11:18 AM