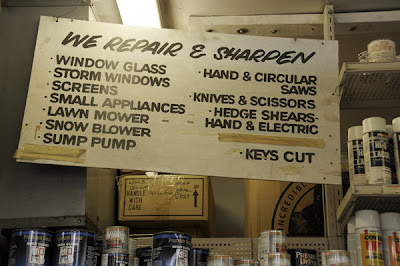 Here's the story and some of the pictures that ran on Patch. I guess it's finally time to admit that as much as I miss the big city, there are certain things I love about living in a small town.

On Memorial Day afternoon, the sun was out, the patio was cool and even though our 10-year-old had had a friend sleep over the night before, I still had enough energy to propose a barbecue. Never mind that we hadn't used the grill in two years and didn't have any fish or enough meat. I could fix that with a trip to King’s. But the grill was covered with two winters' worth of leaves and dirt. Inside, it was covered with rust. While my older son studied for exams, my younger son and I took a bowl of soapy water and a dish towel and set about cleaning the grill. Finally, my husband came outside to turn it on. Three of the four burners flickered. The fourth refused.

"Call the guy who came to fix it before," my husband said.

The next morning, I did. Actually, I called his mother, Marlene Hawes, manager of Buncher's Hardware.

"Hi honey," she said. After a nice chat, she said she'd send someone out to fix the grill the next day. For the past 28 years, the Hawes family has been running Buncher's. Back when I grew up in town in 1970s and ‘80s there were three hardware stores in Millburn. By the time my husband and I moved back here in 1999, only Buncher's remained.

We had rented an apartment for years in the city and were pretty clueless about homeownership. My husband is an electrical engineer by training, but only marginally interested in repairing things around the house. As a writer, I can type quickly, but can't fix much besides a strong cup of coffee.

Bunchers saved us. Walking through town one day with my then three-year-old son, I saw the faded orange-and-white Bunchers Hardware sign on Millburn Avenue. We wandered in. There was a gum ball machine in front and a cranky cat named Checkbook pacing the floor.

My son leaned over to pet Checkbook. I picked out some doormats and light bulbs and asked if there was someone at the store who could hang pictures, install a de-humidifier and move my grandmother's old couch.

"Sure, honey," the woman behind the counter said. She was standing next to an older woman, who smiled. "I'll send David or Frank out to help you."

There aren't many places left where the proprietor calls you "honey," knows exactly where you live and works side-by-side with her ex-mother-in-law. But that's Buncher's. Marlene used to be married to Madeline Hawes' son Frank and they had a son, David. They bought Buncher's from the Buncher family in 1983 (the orange-and-white sign has been there since 1963.)

When the Hawes bought Buncher’s, Frank was an electrical engineer and plant manager and Marlene worked as a customer service manager for General Cable. Frank's parents, Madeline and Bill, quit their jobs to help them in the business. The family eventually bought Maplewood Lock and Key, and though Frank and Marlene divorced in 1990, they continue to cheerfully run the business together. (David, now 28 and married, is a civil engineer for the state and helps out in the store part-time.) 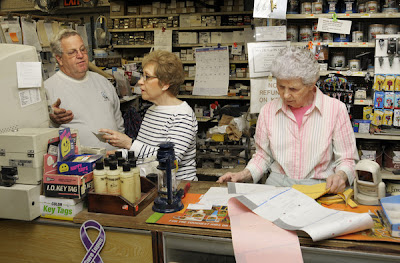 Marlene and Madeline stand next to each other behind the counter, greeting customers, walking them down the jam-packed aisles to find what they need, ringing up sales and offering advice and conversation. It's unusual for a daughter-in-law and mother-in-law to enjoy each other's company even under the best of circumstances, never mind continue to work together after a divorce. "It's an odd situation but a nice one," says Marlene. Marlene is almost 60 and Madeline is 82. Both women are in the store six to seven days a week. "We clicked from the very beginning," Marlene says. "We meet for dinner; we get our hair done together."

The two even vacation together in Cape May. "I'm very lucky at my age to have my mother and mother-in-law's love," says Marlene. "I come from hard times."

Marlene's father died when she was a little girl. "My mother worked to support us and it was never enough," Marlene says. "My grandmother and I took in ironing so we could eat. Since seventh grade, I've always worked."

The hard work has paid off. Though the past three years have been tough for small businesses, Buncher's has carved out a niche by taking care of customers in adversity. This winter may have been snowy and miserable for homeowners, but it was good for the hardware business. "We sold a tremendous amount of salt," Marlene says. "We had a wonderful winter, the more snow the better."

The store tries to distinguish itself from Home Depot, Costco and Lowe's by stocking such seasonal items as shovels and bags of salt year round. Though Marlene concedes the prices might be better at these chains, she guarantees that Buncher's won't run out of what you're looking for. "I never get rid of seasonal items," Marlene says. "If someone in the middle of summer wants a shovel, I can provide that. If someone wants Christmas lights, I can provide that. We have a huge garage in back and people know that."

Buncher's also does a big business replacing windows and screens and selling cleaning supplies and light bulbs. In fact, light bulbs are 25 percent of their business and Marlene keeps bulb prices low. "In 15 years, I haven't changed the prices on bulbs," Marlene says.

Though the government urges consumers to buy compact fluorescents, that doesn't mean that customers want them. Buncher’s customers want incandescent bulbs. "The compact fluorescents don't move that well," says Marlene. "If I sell 15 a week, it's a lot. I sell hundreds of the others. I'm hoarding as many as I can of the 65 watts. I have a whole basement full of them. I have one woman who spent $1,000 on them so she wouldn't run out before she died."

One of the most delightful things about Buncher’s is the store's willingness to get you out of a jam. When our hot water heater flooded the basement, they immediately sold us the dry vac to suck up the mess. One of their employees put together the not-so-easy-to-assemble TV stand in our basement. They've hung up mirrors, replaced glass windows broken by hockey pucks and baseballs, moved a ripped love seat from the family room to the basement, fixed the grill, and sold me more shovels, doormats, ice picks, bags of salt and light bulbs than I can count. "That's why we love the store," says Marlene, who has no plans to sell the business or retire. "We're always taking care of people."