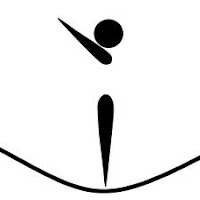 Last week, the daffodils and crocuses were pushing up out of the ground. Then it snowed and the forsythia started to bloom. Yes, it's spring in New Jersey. And though I drank hot tea and wore a winter jacket to my younger son's Little League game, I've been overcome with an urge to do spring cleaning.

I looked around our house and yard. What could be thrown out? What had rotted but could be replaced with something green and fertile? Out on the front porch, the flowerpots were filled with dirt. I circled back to the patio, picking up baseballs that that had been buried under snow-covered bushes. One of our hockey nets had been run over by a snowplow, and thrown onto its back into the yard. I looked past it to the trampoline and swing set, which looked forlorn and abandoned.

My kids are almost 11 and 15. They haven't gone down a slide or swung on a swing in years. In my heart, I know the swing set should be dismantled and taken away, but my husband "designed" it with the help of Cedar Works at the end of the last century. I know he's still attached to it, even though no one else is. I guess there's a remote chance our grandkids will climb on it some day, if I can't talk my husband into selling the house and moving into the city the minute our youngest goes to college. The trampoline, on the other hand, had pretty much outlived its usefulness.

The trampoline was a gift from my father. It was the kind of gift my father specialized in: Bulky, extravagant, dangerous, and unexpected. We didn't know we were getting it until a truck drove up with it one afternoon. My kids loved it immediately. My father also bought a trampoline for my nephews in Montclair, and all five grandsons took turns at each other's houses, jumping up and down on the things, screaming with glee. I have a beautiful collage of pictures, taken one spring day after the trampoline was assembled. The sun is setting and there are my kids, racing around the trampoline, jumping for joy. They look ecstatic.

Two years after he gave us the trampoline, my father died of lymphoma. My husband removed the trampoline's springs. My kids kept jumping on it. My husband and my neighbor traded stories about kids ramming into each other on other trampolines and breaking elbows and wrists. They said the trampoline was dangerous, but it made my kids happy, and I was glad we had it. It was a pleasant reminder of my father, who had not always been so pleasant. He could be volatile and combative, but also generous and fun. My sons remember him fondly. He often showed up unannounced, bearing gifts and clutches of $20 bills. My kids were still in car seats at the time and the money seemed like a fortune to them. Grandpa must have a treasure chest in the trunk of his car! I've worked hard to protect my kids from their grandfather's less appealing qualities. When he died, my boys gave loving eulogies at his funeral and dwelled on his death for a long time. But they don't talk about him much anymore and it's been a long time since they jumped on the trampoline.

Meanwhile, the weather has not been kind to it. It had started to rust. Puddles of water and piles of dead leaves covered it. Screws had fallen to the ground. Pieces of black foam were scattered around the yard. The grass beneath it had died and turned to mud. Nothing about it said, "Come play."

I called a man to take it away. We will call him Leonard, because he reminds me of the singer Leonard Cohen. He has long hair and his clothes are too big but he has chiseled cheekbones and large blue eyes. He is handsome and intelligent. I don’t know what his background is but he has a mellifluous and stunningly beautiful speaking voice. Every time he calls, I replay his message. I got his number years ago, when I was trying to get rid of my grandmother’s living room sofa. No charitable organization would take it because the upholstery---once a lovely, blue, flowered chintz-------was faded and ripped. Someone gave me a yellow piece of paper with his name on it and said he would haul away whatever needed hauling.

Leonard called twice to confirm our address. He apologized, but said his memory was shot. The next day, he pulled into the back of our driveway. He looked down the hill at the trampoline and said that because he didn't live in town, I would have to get a permit so he could deposit the trampoline parts in the town dump. I said this looked like a big job for one guy. Leonard said he had brought his tools.

My younger son was home sick that morning. He was lying on the couch, reading The Firm. When I told him that the trampoline was being taken apart and taken away, he barely looked up. I did not remind him that his grandfather had given the trampoline to him and his brother, and that other than some hardcover books about Jewish history, that trampoline was his only legacy to them.

Two hours later, Leonard rang the bell and said he was done. I went outside. The sun had gone behind a cloud. The trampoline was in pieces underneath a tarp, in the back of his truck.

“I think I dropped my switchblade,” he said nonchalantly.

“Yeah, I couldn’t find it but I didn’t want to take any more of your time.”

“There’s a knife down there somewhere?” I started to panic. The ground was covered with snow. “We need to find it.”

“You’re worried about the kids?” he said.

“Uh, yeah. You don't remember where you dropped it?”

“I have Alzheimer's, I can't remember anything, my short term memory is shot.”

“Have you been diagnosed?”

“I'm taking pills so yeah, I guess I've been diagnosed.”

We spent a few minutes talking looking for the knife. I could tell he wanted to get out of there. “Maybe when the snow melts, you’ll find it,” he said. I looked into his eyes. He always seemed too smart to do what he was doing and now he seemed too young to have Alzheimer's.

“Maybe.” I didn’t feel hopeful. I paid him and got into my car. He pulled out behind me. I followed him to the dump and got the permit. He had already dumped the trampoline into the dumpster by the time I got back. I waved goodbye and drove away.

When I got home, I saw that my friend had dropped off six boxes of Girl Scout cookies. Normally, I tell my younger son not to open the door for anyone but he must have made an exception when he saw her and her bounty. He didn't want any cookies so I stood in the kitchen alone and ate some Thin Mints, then a Tagalong Peanut Butter Patty. When my older son came home from school, I told him about the trampoline. "Oh," he said. "I wanted to say goodbye."

That night, my eyelids and nose swelled. My cheeks felt sunburned and tight, the skin around my lips started to peel. I was having an allergic reaction, but to what? I had eaten boxes of Girl Scout cookies before without incident. Was I allergic to the process of spring cleaning? My kids growing up? Was my unconscious hounding me because I just thrown out my father's biggest gift to my kids?

Leonard called the next day to say he'd found the switch blade in his pocket.

Yesterday morning, I raised the shade in our bedroom and looked outside. The trampoline was gone. I had a bird's eye view of the swing set. The back yard looked green but empty.

Before he died, my father gave us a volleyball net. It was a lovely, gentle gift but between the trampoline and the swing set, we had no room for it. My husband propped the box against a wall in the garage. We forgot about it. My father has been dead almost six years but the volleyball net is still here, good as new. There's room for it near the swing set.

Posted by Writermom at 8:55 AM