Greetings, readers! Long time, no blog. As you may have noticed (if you're reading this on the computer and not on your iPhone or Blackberry), the design of Flawed Mom looks different. That's not exactly by design, forgive the pun. A few weeks ago, I was poking around blogland and saw that Google was offering up some new templates. I experimented with a few, only to find that I couldn't go back to the original cozy, comfortable one I had been relying on for years. The new templates were interesting but none were exactly right. Still, there was no going back. As Darwin said, adapt or die. What you see here is is a new border, new colors and and an attempt at a new attitude. Posts will be shorter but will continue to be a big pile of contradictions: Tart, sweet, skeptical, optimistic, giddy, sad, confident, full of doubt and periodically, hope. Subjects will include the challenges and pleasures of motherhood, marriage, teaching, reading, writing, cooking and trying to accommodate the music and movie tastes of two growing boys (Anyone else been listening to Eminem's "Not Afraid" and "White Trash Party" over and over again in the car?)

When I first started this blog, my intention was to turn the essays here into a book called, How I Killed the Tooth Fairy and Other Tales of Flawed Mothering. But my agent didn't particularly like my book proposal (she was kind about it, but firm) and suggested, gently, that I go back to writing fiction, which is why she wanted to represent me in the first place. So I've been spending more time writing short stories, sending them out into the world and praying for publication. A few months ago, I wrote a short story called, "Go Away and Come Back," and sent it in to Glimmer Train. It was a finalist for one of their competitions and I was initially ecstatic. Then reality settled in: Being a finalist is lovely, but to paraphrase something George's girlfriend said on "Seinfeld" before she dropped dead, it doesn't feed the cat. So I took the advice I give my journalism and creative writing students, ("Revise! Revise! Revise!") and revised it. Then I gave the story a new title, "Raised by Narcissists," and resubmitted it to Glimmer Train. This time, the story received an honorable mention. I fell into a funk---not the kind of funk Daphne Merkin wrote about in last Sunday's New York Times magazine http://www.nytimes.com/2010/08/08/magazine/08Psychoanalysis-t.html but still a funk.

In the mean time, I decided to re-invent this blog. One of the templates I originally chose had a a hyper-active border that was supposed to look like a combination of artistic endeavors--music, theater, books, math and art. My kids groaned when they saw it so what you see here is a compromise, simple and hopefully not overpowering in its blandness.

The other border got me thinking about art and the people I know who make it. Coincidentally, three wonderful women artists I know have new venues for their work. Barbara Friedman, Jessica Lenard and Sarah Goldstein have all shown their work at the Visual Arts Arts Center of New Jersey (http://www.artcenternj.org/). When we first moved out to New Jersey, I saw the Visual Arts Center as an oasis. Great, local artists taught and showed their work there. My kids took classes there and actually liked them. It turns out that some of the artists weren't so local (Barbara and Sarah live in New York), but never mind. These three are all inventive, ingenious women whose work is beautiful to look at and interesting to think about.

Barbara has a show opening tonight at BCB Art in Hudson, NY (http://www.bcbart.com/current/index.html). The show goes until September 19th. Barbara's luscious, arresting paintings, "Climber," "Student" and "The Spectator Place," are above. Barbara is one of my oldest friends---we took writing workshops together back in the Eighties, at the New School, with the wonderful late author and writing instructor Richard Brickner. Barbara is an art professor at Pace University and one of the most brilliant artists I know. (http://www.barbarafriedmanpaintings.com) 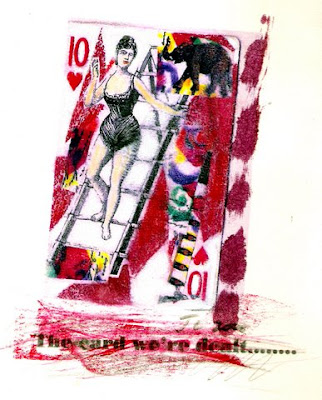 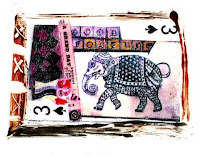 Jessica Lenard is an intense, fantastic artist who teaches at the Visual Arts Center. She is now making a series of small, gorgeous paintings called, "The Cards We're Dealt." Her work is being shown at the Monmouth Museum, the Contemporary Art Network NYC, and The Distillery, a gallery and art space in Jersey City. Two paintings from her new series, "10 of Hearts," and "3 Spades, Good Fortune," are shown here. (http://www.jessicalenard.com)


One of Sarah Goldstein's paintings, "Rabbit Group 3," hangs in our front hall, and even better, can now also be seen on the website of Tarpaulin Sky Press, (http://www.tarpaulinsky.com.) Tarpaulin publishes poetry and prose, and reviews small press books. For more on Sarah's work, see her blog http://www.earlymorninghours.blogspot.com and the website, http://re-title.com. 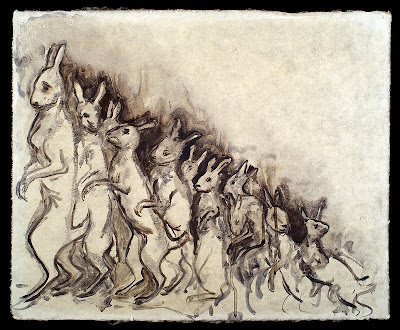 All these women give me courage. Check them out.
Posted by Writermom at 10:18 AM