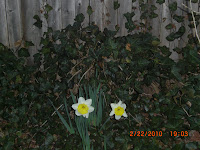 Signs that spring has sprung:
1) Flowers The place where I teach has a parking garage. I don't make much so I try to keep parking costs to a minimum and have gotten the time it takes to grab a parking ticket, find a spot, get to class, teach and pay for parking, down to a science. All in, it's 90 minutes and my parking fee comes to $3.50. The parking ticket machine doesn't like credit cards or wrinkled dollar bills, but it's pretty good about taking tens and twenties. On Monday, I gave the parking ticket machine a $10 bill. It gave me back $6.50 worth of nickels. That's 130 nickels. As I dumped the nickels into my purse (there were too many to fit in my change purse), I cursed everything. But later that day, I noticed that the daffodils had popped up. And as I pulled into our driveway, I saw that the snow had so totally melted, you could see the dog poop on our lawn.
2) Public Bathrooms The bathroom near the snack bar at the park where the kids play Little League is now open ---if you know someone. For years now, my neighbor and I have been taking our dogs for runs in the morning. We run by the park, where kids play baseball and roller hockey. This is the park where I grew up badly playing softball, before the coach's wife up and left him. But nostalgia aside, it is a large, pretty park that includes public tennis courts, the town pool and the fire house. You would think with all these public buildings, at least one might have a bathroom open during the winter for us middle-aged ladies who might need to make a pit stop mid-run.

Alas, no. (Believe me, I know there are alternatives to indoor plumbing. Occasionally, I have followed my dog into a bush.) But I try to be a tiny bit civilized while I'm sweating like a pig, and today, as I was running towards the park, I saw some trucks and big piles of dirt. Little League opening day is coming up, the fields are being prepped and where there is construction, there are construction workers. I didn't see any Port-a-Potties, and my heart filled with hope. The park bathroom might be open for the construction workers! I walked towards the snack bar, which is near the bathroom, and there was my friend L. She is both an art dealer and the queen of Little League snack bar operations, titles she wears with dignity. A new oven was being installed and she was there to supervise.