Snow Day, with Beef and Chicken 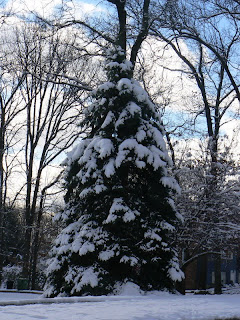 Oh joy, another Northeast snowstorm. In our house, that means---video games, people snacking all day long, a wet dog, a cancelled wrestling match (and lots of testosterone-fueled, pent-up energy, so wrestling in the basement), no basketball practice, and my husband telling us all to be quiet so he can be on a conference call for eight hours. The weather, as annoying as it is, is also gorgeous. I just got back from a walk to the post office with my neighbor and our dogs, and now I'm looking out the window at tall pine trees, heavy with snow, listening to the microwave defrost four pounds and a half pounds of chicken.

Yes, that's what snow does to me---it makes me want to go for a short walk and then cook something for a long time. Yesterday, I made brisket (recipe below.) Our Internet access was down, my husband was a plane-ride away, my kids' school had already been cancelled and I was trying to decide if I should cancel the class I teach Wednesday mornings. Though the nice lady at Comcast explained to me the difference between a router and a modum, and helped me reconnect to the Internet, I still felt disoriented and decided to cook my way out of it the only way I know how: I defrosted four pounds of brisket , braised it, stuck the pot in the oven and went to get my nails done. The woman who does my nails is married to a man who works as a baggage handler at the airport. He had just called her to tell her the airport was closing today. I called my husband, told him to get a new flight home, waited for my nails to dry, then went home to baste the meat.

I learned to make this brisket recipe ten years ago, when we moved out to New Jersey and back to my hometown. You would think that a lot of my friends from high school would have moved back here and I would have a nice built-in community, welcoming me back, but they didn't and I didn't. Our first year out here, I was commuting to grad school, lonely and pregnant with my second son. I was studying a lot and driving my older son around and I had no real friends to speak of, unless you counted the neighbor who sold me maternity clothes at a discount and occasionally invited my son over to play with her son. When my husband's roommate from college's wife asked me if I wanted to take a cooking class with her at the local supermarket, I said yes. It was a ten-week class and if nothing else, I figured this woman and I would be good friends by the end. (We were.)

The four women who taught the class were beyond delightful. The one I remember the best was the one who taught us this brisket recipe. Her name was Kathleen and she was a cheerful, blonde, middle-aged Mom, who took cooking seriously but didn't yell at us for making mistakes (unlike the woman who taught us how to bake cakes in the next course we took.) I think I have made this recipe at least 100 times in the last ten years. The addition of the half bottle of chili sauce comes from my Mom. In the time I think of as BMW (Before Mom Worked), my mother cooked endlessly and well. She works full time now and barely cooks anymore but whenever I have a cooking question, I call her. (I generally bristle when Mom tells me what to do, but this kind of Q&A gives us a chance to revert to our original mother-daughter roles, without the tension.)

Note: The beauty of this brisket recipe is that this is where your old brown sugar goes to die. Keep that block of brown sugar and don't worry if it's hard as a rock. Cut off a couple of inches and throw it in the pot with the meat. It will melt quickly and smell wonderful. And don't stress about whether you have exactly the right number of tablespoons or not. Too much brown sugar is never a bad thing. My friend Naneen came over with her family for Shabbat dinner a few weeks ago, and I made this brisket. She was patient enough to type this recipe and post it on line. Thanks, Nan!(http://www.recipezaar.com/lauras-shabbat-braised-brisket-of-beef-407721). I also want to point out that Rao's marinara sauce works really well in this recipe. It may seem a little crazy to buy a cheap cut of meat and then pour an expensive jar of tomato sauce on top of it but good meals are generally a combination of highs and lows, and that includes the cook's mood swings.)

The chicken recipe I got from that god of basic cooking, Mark Bittman. (In fact, his recipes are the reason I will not start reading the New York Times on a Kindle or an Apple I-Pad---I like to cut his recipes out and write on them. ) I know the recipes in Bittman's column, "The Minimalist," and on his blog (http://bitten.blogs.nytimes.com/), are not always perfect, but my experience is that most of his recipes work really well and are easy to follow and deviate from . This recipe is his, though I've doctored it up. For instance, I rarely have turnips on hand and though I love potatoes, my family doesn't, so I often add extra onions and carrots instead. Today, I don't have any celery or heavy cream, our driveway isn't plowed and I'm not about to walk to the supermarket in the snow, so I'm just making do with whole milk (defrosted from the freezer) and adding raw broccoli and cauliflower, left over from a Super Bowl party.

The first time I made this chicken, my younger son had strep throat and my older son was struggling under a mountain of homework. They were both cranky and overwhelmed but they gobbled this up, so I cut out the recipe and wrote at the top, "Awesome. Kids were euphoric."

Preheat oven to 350 degrees F.
Wipe the brisket with damp paper toweling.
Combine flour, kosher salt and pepper and dredge the meat in the seasoned flour. (Note: I skip the flour and it is just as good.)
Heat the oil in large roasting pan with a cover ( a thin blue enamel roaster is fine- just make sure it is an oven-proof pot and has a lid).
Brown the meat, starting fat side down, on both sides to seal in the juices.
Spread the garlic over the top of the meat, pour the vinegar over, letting it drip into the pan, then add all the remaining ingredients, except the onions.
Bring to a slow boil, basting the meat until the ingredients are blended.
Cover the pan and place the meat in the oven for 2 to 2 1/2 hours until meat is almost tender, continuing to baste occasionally, adding small amount of boiling water as needed.
Towards the end of the braising time, lay the onions in a single layer over the top of the meat. Extra onions may be placed around the meat; baste with the gravy, cover the pan and return to the oven for about 20 more minutes or until the onions are tender.
Adjust the seasonings.
Let meat stand for 1/2 an hour at room temperature before slicing against the grain.
Freezes beautifully.

Put butter in a deep pot or skillet large enough to enclose the whole chicken. Turn heat to medium high. When butter foams, add chicken, breast side down. Cook, checking that chicken doesn't stick. Sprinkle with salt and pepper, and brown for about ten minutes. Turn and brown the back of the chicken, sprinkling with salt and pepper, and brown another ten minutes. Remove chicken to a plate and pour out the excess fat (unless you want it to be really fattening and delicious, in which case, keep it in the pot for the vegetables.)

Add vegetables and herbs to pot. Cook, stirring occasionally, for 10-15 minutes. Stir in chicken stock and cream/milk, and bring to boil. Put the chicken back in the pot and adjust the heat so that the mixture barely simmers. Cover and cook for 40 minutes to an hour,or until chicken is tender and cooked through.